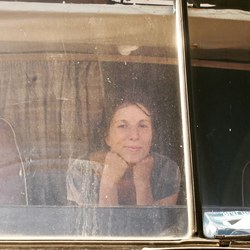 In 2015 we went to a low budget walking and hitchhiking trip around the Balkans. For the first 1000 kilometres we had luck most of the time and could always hitch a ride quickly. But on a hot day, not far from the Romanian-Bulgarian border nobody picked us up for hours.

We were already getting demotivated when we noticed our savior: a toilet, thrown away next to the road. We thought that posing with the toilet would help to show the drivers that we were a cheerful and funny couple worth picking up. So we continued hitchhiking while sitting on the toilet.

We got some smiles and waves but still none of the cars that passed by us stopped. At least we were having fun with our ’toilet humour'. After a while we felt that we’d been waiting long enough so we decided to leave the porcelain throne and started to walk.

After ten minutes of walking in the hot sunshine a car stopped next to us. After waiting for half the afternoon it was a heavenly feeling to sit in. We had a lovely conversation with the young couple who picked us up and took us to Varna. On the way they even invited us for the most delicious Bulgarian fish soup at a local restaurant so this long day ended really well.

Find itineraries picked by locals around the world

Other stories by Patricia B.