Driving a 14-strong husky sled through a near blizzard

It was -28 degrees, and it was starting to get dark outside.

The little wooden hut that I was in with some of my colleagues was fairly warm and cosy, thanks to the lively fire that I had started earlier that afternoon. However, outside the huskies were getting restless. They were barking and howling. I knew that they didn't want to spend the night out there. I can't blame them.

We were supposed to wait until the morning, when another sled would arrive so that we could take them home. But I'm a spontaneous person, and I decided to do it the hard way.

There were 14 run-hungry huskies outside and only one sled. Normally, each sled has 6 huskies or maybe 8 pulling it. I'd never even driven a sled with more than 6 huskies before. 14 of them was going to be crazy.

I set up the lines with one of my colleagues hooking up the dogs one by one to the sled, as the snow and wind started to pick up. I took my gloves off to tie the ropes better. My hands and fingers were almost numb from the cold.

When all the huskies were attached to the line in front of the sled, we were off. I didn't want to waste any more time than I had to. I wanted to get the huskies and myself home.

If you've ever been pulled by huskies before, you know how fast they can pull you along in your sled.

We tore through the Lappish evening like a Japanese bullet train. The wind and snow rushing into my face, the part of it that was exposed anyway. Driving that fast through the wilderness, I have never felt so alive. 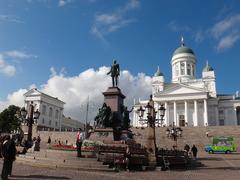 Other stories by Anthony S.