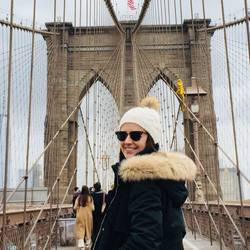 I've connected through Newark before, but this was my first time outside of the airport making the trek to Manhattan. I thought surely there was an easy way, but four hours later, I was still en-route.

I had a LOT of luggage with me as I was there for my friend's wedding. The worst thing was the longest escalator at Penn station broke down while I was on it and everybody was looking at me as if it were my fault. A couple people below tried to climb over me until another traveller who had his own bags to contend with, offered to help me. We went to grab a drink nearby. Turns out he is from Canada. Always a pleasure bumping into friendly Canadians!