A Weekend in Frankfurt

Frankfurt is one of the largest cities in Germany. It is the major financial center of the European continent, and it runs one of the busiest airports in the world. The city was severly damaged during World War II, it was rebuilt around the historical city center of Altstadt.

It is the largest religious building in the city and a former collegiate church. Despite its common English name, it has never been a true cathedral, but is called the Kaiserdom (an "imperial great church" or imperial cathedral) or simply the Dom due to its importance as former election and coronation church of the Holy Roman Empire. As one of the major buildings of the Empire's history, it was a symbol of national unity, especially in the 19th century.

The Eiserner Steg (Iron footbridge, Iron bridge) is a footbridge leading over the river Main, which connects the centre of Frankfurt with the district of Sachsenhausen. It was built in the year of 1868.

The Historical Museum (German: Historisches Museum) was founded in 1878, and includes cultural and historical objects relating to the history of Frankfurt and Germany.

The Old St Nicholas Church (in German: Alte Nikolaikirche) is a Lutheran medieval church. It is located near the Römer city hall in Frankfurt's old town called Altstadt. It has 51 bells; 4 are used for peals and 47 are used for carillons. The first chapel on its site was built in the mid-12th century, the current in the mid-15th.

Römerberg is a public space in Frankfurt. It is located in front of the Römer building complex, seat of the Frankfurt city administration since the 15th century. As the site of numerous Imperial coronations, trade fairs and Christmas markets, the square is the historic heart of the medieval Altstadt (old town) and today a popular tourist destination.

St Paul's Church (German: Paulskirche) in Paulsplatz, central Frankfurt, is a church with important political symbolism in Germany. It was started as a Lutheran church in 1789. By 1848, it had become the seat of the Frankfurt Parliament, the first publicly and freely-elected German legislative body.

The Goethe House is a writer's house museum in the Innenstadt district of Frankfurt. The original building was the family residence of the Goethe family, most notably Johann Wolfgang von Goethe, until 1795.

MyZeil is a shopping mall in the center of Frankfurt, with a unique architecture.

Eurotower is a 40-storey, 148 m (486 ft) skyscraper in the Innenstadt district of Frankfurt. The building served as the seat of the European Central Bank (ECB) until 18 March 2015. 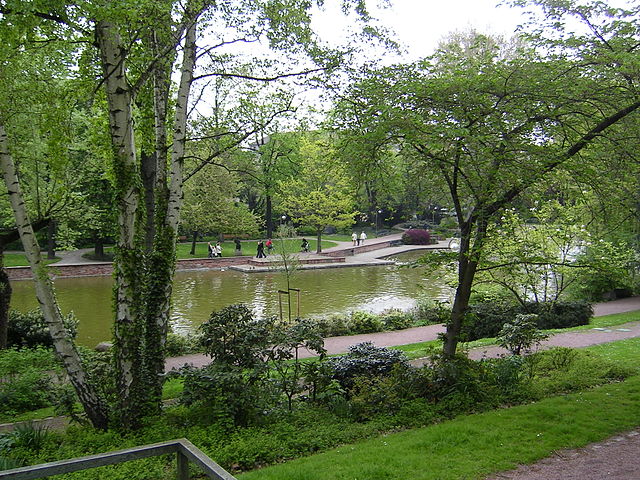 The Wallanlagen is a park area in Frankfurt which forms a five-kilometre-long green belt around the city centre. The parklands run along the course of the former city walls, which were built from the 14th century and which were torn down in the early 19th century. The former course of the city wall was landscaped as a park between 1804 and 1812.

The tower has five underground floors and two public viewing platforms. It is currently the only skyscraper in Frankfurt with a public viewing observatory.

The Frankfurt Stock Exchange (Frankfurter Wertpapierbörse) is one of the world's largest stock exchange by market capitalization. There are a bear and a bull statues in front of the Exchange. 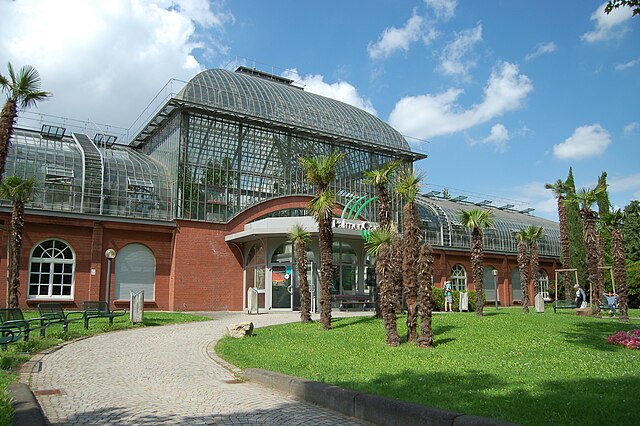 The Palmengarten is one of two botanical gardens in Frankfurt. It covers a surface of 22 hectares.